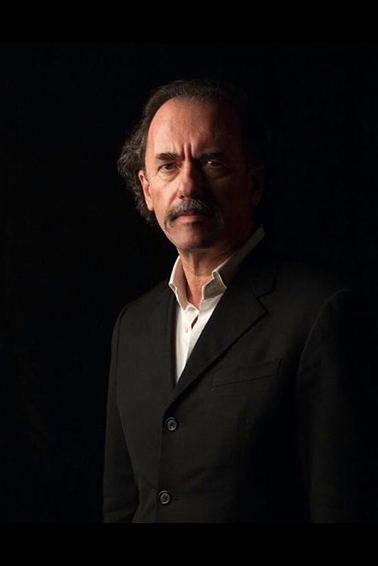 Born in Teheran in 1954, Bizhan Bassiri reached Rome in 1975 where he graduated at the Fine Art Academy under the guidance of Toti Scialoja. He started exposing in 1981, participating to personal and collective exhibitions. From 1990 he dedicated himself to the draft of texts and to the making up of scenic paintings of various concerts in cooperation with Giorgio Battistelli and Stefano Taglietti. From 1995 he started to make up some permanent works in different artistic sites.

Bizhan Bassiri’s artistic research began when he started using different materials: papier-mâché and aluminium surfaces, iron or bronze, lava elements, photographic working-out. He is interested in the magmatic flowing of the material always related to the architectural space. His aim is to combine the artistic language together with the poetic, literary, theatrical and musical ones, through a research which is the basis of its Manifesto of the Magmatic Thought.
Amongst its numerous personal exhibitions can be mentioned those at the Centre d’Art Contemporain in Tiers (1996), the Kunstmuseum in Borholms (1998), the Collegium Artisticum in Sarajevo (2002), the Centro Arte Contemporanea BM in Instanbul (2004).
His permanent installations are at the Centro per l’Arte Contemporanea Luigi Pecci in Prato, the Ars Aevi Museum in Sarajevo and in Piazza Matteotti in San Casciano dei Bagni (2002). Bassiri has been selected to represent the Iranian Pavilion at the 57th Venice Biennale International Art Exhibition, running from May 13th to November 26th 2017. He lives between Rome and San Casciano dei Bagni (SI) and he regularly shows his work in galleries and museums in Europe, in the United States and Asia.