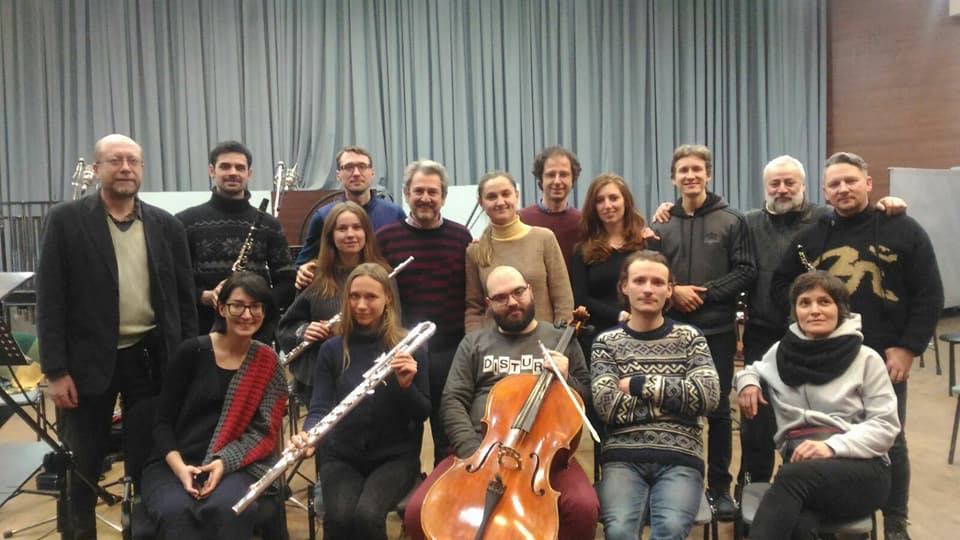 The UKHO ENSEMBLE KYIV, founded in 2015 by Ukho Agency (managing and curatorial team) and Luigi Gaggero (artistic and musical direction) unites twenty five of some of the very best Ukrainian soloists, joined by the American Rachel Koblyakov as concertmaster.

Recreating the utopia of sixty rehearsal hours for every concert, the ensemble pre- pares its programs with the greatest accuracy. Instead of a widespread structural- ist approach to contemporary music, the ensemble privileges a phenomenological one: its interpretations are not based on an abstract idea of time which needs to be calculated, but rather on the human experience of the empathic encounter between the interpreter, composition, and audience, which brings about the feeling of lived time. This approach results in moving, colorful interpretations, in which contem- porary music – despite its complexity – abandons itself to the sweep of “classical” phrasing. The readings of the great modern Masters (Messiaen, Grisey, Varèse, Ligeti, Takemitsu, Xenakis, Kurtág, Silvestrov…) alternate with those of great contemporaries (Ambrosini, Andreyev, Antignani, Couvreur, Gervasoni, Gourzi, Naon, Rathé, Rotaru, Solbiati..). Featured Ukrainian composers (Kolomiiets, Man- ulyak, Retinsky, Pashinsky, Zaika, and Zavgorodnii) are all very young, three of them belong to the core of the ensemble.

Ukho agency, a curatorial group known for all things interdisciplinary, often com- pliments the ensemble’s concerts with visual interventions, irregular choice of con- textual narrative and hosting venues. This leads to numerous collaborations with young Ukrainian artists – the ensemble’s resume already includes three produc- tions for the National Opera of Ukraine, all of them (Gervasoni, Cella, Sciarrino) dubbed historic as the first contemporary operas in decades to be put on stage of Ukraine’s capital theatre.

A rare flower, Ukho Ensemble resides in Plivka, an art centre recognized for its unconditional raves, experimental use of media, and a straightforward outsider sentiment. What this means practically is that at Ukho’s concerts conservatoire mastodons often sit next to young tattoo artists, budding tattooed poets, and age- less low-key promoters of all-round legendary techno parties. Quite an empathic encounter.