In one of the finest books in contemporary literature – Le Roi des Aulnes [The Erl-King] by Michel Tournier – the hero is shown a gyroscope: “It is the key to the absolute”,  he is told,“having the power to escape the motion of the earth. And just for this reason, it seems to turn. In reality instead, we are spinning around it …What you feel in your hands is the immobility of the gyroscope opposed by the rotation of the earth in which you are entrained”. Scientifically speaking, apparent rotation does not exist. There exists only stasis, apparent
immobility. Of both paradoxes – which are really only one –  Léon Foucault with his pendulum has given, as we know, the ultimate demonstration. 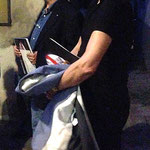 Artistically speaking, things are different. Speculation becomes intuition, always, nor could it be otherwise. To the point of granting the artist – and this is certainly the case of Marco Bagnoli – unlimited immunity to traverse all the practical and metaphysical categories of the spirit without feeling responsible to the world; without owing it anything. Gratuitous act par excellence, and entirely useless, art can propose an epistemology without proofs. At the same time, however, it can move in analogical parallel to science,whose conquests it often proclaims in some reflected manner (as with the Cubists and Futurists, spurious prophets of Freud and Einstein). If science, like religion, is by definition dogmatic, then art will be relativistic. Paradoxically then, it has good chances of becoming once again the forerunner of future scientific themes, now that computer technology has begun to short-circuit reality and virtuality. 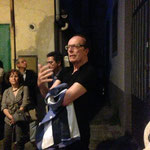 Through empathy that is both mental and mystical, Bagnoli has always operated alongside the hermeneutical processes of science, aware that his field of action remains that of the hypothesis, the empirical visionary, the insinuation of uncertainties there where we could expect truth, achievements to be definitively consigned to mankind. A Wanderer artist by instinct and vocation, Bagnoli is the simulator of obscure laws of physics. He is an agnostic scientist who does not assume the veracity of his cognitive research, but
“demonstrates” it in mythopoeic manner. To science he leaves the part of the Stone Guest, the passive yet vigil presence, ready to step in if needed. 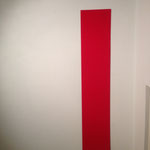 And so it is with Apparent Rotation, the video by Matteo Frittelli that forms part of this scenic work, documenting the event presented by Bagnoli in 2011 at the Hoepli Planetarium in Milan, curated by Nicoletta Pallini.
The geographic orientation that is for Bagnoli a ritual of initiation tracing a circular path, attempts here the vaster scale of the astronomical dimension. Here the cardinal points prefigured by the quincunx pattern, according to the mathematical mysticism of the Pythagoreans, are indicated by four fishing-rods set soaring in space by the artist, now become a cosmic fisherman. 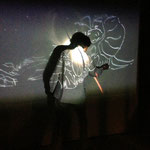 In Bagnoli’s creative evolution this is a new archetype, as was the celestial archer of the axis mundi, the Arabian phoenix, the seven sleepers, the fire-balloon, the shadow and the anamorphosis, all themes harking back to the primal motif of direction, of the centre, the margin and their reversibility, in Cartesian accord with the axioms I X You, Space X Time: Tables of the Laws of sorts, that sanction and simultaneously negate the principle of alterity.
A fisher of stars, as has been said; in this case, of the Leonidas comets streaking out of the sidereal abyss to announce the autumn season. The artist raises his fishing-rods to join them in alchemistic combination with a jewel whose vertebral structure is inspired by the ancient sextant of the Polynesian mariners. But this is only a mise-en-scène of orientation. In reality, as written in the Sefer Hechaloth of the Kabbalah, there exist no physical directions to be taken – neither up nor down, east nor west, inside nor outside, “because in the cosmos everything is moving”. 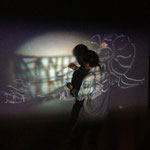 Only symbols, then, can orient us, can show us the way. In the scenic work we are watching, the physical presence of the artist, standing between the event projected by the video and the great transparent sheet on which he will improvise a drawing, becomes a further station in this secular liturgy encompassing all of his research. The artist becomes the filter between the completed work and the nascent work whose invisible trace he is marking. The time of his ongoing action is that of the video, of action that has elapsed.When the light goes out, there appears against the background the fateful sign of the red band, the incontrovertible “trademark” of Bagnoli’s work, emblem of a beginning on which everything converges and beyond which it will be impossible to venture. 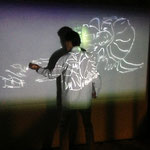